Continue your fascinating in-depth exploration of the Balkans if you joined our Adriatic small group tour, or start your Balkans tour experience with us in Sarajevo, Bosnia.  The Balkans Explorer tour visits extraordinary monasteries and churches, important monuments and historical sites, and quaint picturesque villages as well as places of immense natural beauty.

From Sarajevo we visit magical Mostar and then cross the border into Montenegro. Driving along the gorgeous Adriatic coastline, the tour visits the charming towns of Kotor and Budva. From Budva, it is a short drive over the Albania border to Shkodër Lake which lies on the border of Albania and Montenegro. It is the largest lake in Southern Europe.

The tour visits the small town of Shkodër and then continues to Kruja.

The name and the importance of the city of Kruja are closely related to the 25 years of activity of Albania’s national hero, Skanderbeg, who in the fifteenth century made Kruja a bastion of uncompromising resistance against the Ottoman. The Gjergj Kastrioti Skanderbeg Museum is situated inside the castle walls, which date back to the fifth and sixth centuries A.D.

Within the walls of the castle are also the Ethnographic Museum and the Dollma Tekke. Near the castle’s entrance is a traditional market, which dates back to the period of Skanderbeg. Here, tourists can find Albanian craft products such as embroidered items, carpeting, silver objects, copper, alabaster, filigree, traditional clothing, antiques  at the traditional Old Bazaar of Kruja.

We travel throughout Albania with heritage influenced by the Greeks, Romans, Italians and Turks and then into Macedonia, Kosovo and Serbia. Albania is a wonderful surprise!  There is great beauty, amazing archaeological sites and interesting history.

Moving on, the tour crosses the border into Macedonia, one of the successor states of the former Yugoslavia, from which it declared independence in 1991. We start with a visit to Ohrid, a small resort city on the hilly shores of Lake Ohrid. The compact cobblestoned old town of Ohris (UNESCO), is chock full with amazing medieval churches and monasteries.  Open-air ruins stand alongside traditional houses with red-tiled roofs. The massive walls of the centuries-old Samoil’s Fortress, at the top of the hill, dominate the city skyline. Additionally, we visit Skopje, the capital of Macedonia.

And now, the fascinating tour continues into Kosovo, officially the Republic of Kosovo, is a partially recognized state and disputed territory in Southeastern Europe that declared independence from Serbia in February 2008. Kosovo is largely Albanian-speaking and Muslim. Graves and artifacts of Illyrian Dardans were found in Prizren’s vicinity, which shows that the area of Prizren has been inhabited since ancient times. It was for a while the center of the Serbian Empire.

The Ottomans occupied Prizren on June 21, 1455, and that is when the oriental urban development of Prizren began. From all the cities of Kosovo, Prizren has best preserved the architectural physiognomy of the past. Another special visit in Kosovo is to the Patriarchate of Pec (aka Peja), UNESCO site. The complex has four churches build from 1220 to 1330. There are currently twenty-five nuns residing here at this time.

And the tour keeps getting more interesting, as we venture into Serbia!  Due to political reasons we need to enter Serbia from Montenegro, not from Kosovo and a two-hour scenic drive down along the valley of the River Ibar, to Novi Pazar, capital of the southern area of Serbia called Sandzak. It is a predominantly Muslim community. The Old Town is very Turkish – more like Bosnia.

Lots more UNESCO sites as we travel deeper into Serbia including the 13th c. Sopocani Monastery, one of the best monasteries in Serbia and Monastery Studenica. Then a change of scenery as we ascend to Mount Zlatibor, a National Park of golden pines.

Now, we drive through central Serbia, to Belgrade, the capital of Serbia.

Belgrade has been the Serbian capital for 6 centuries. It is a city of rich cultural activities including concerts, theater performances, galleries and fine dining. The tour spends three delightful days exploring Belgrade. We visit museums, markets, temples and churches, the old fortress, the New Belgrade. One evening we experience the authentic charm of Belgrade and its bohemian/artist quarters of Skadarlija, similar to the Montmartre in Paris. Another evening we dine on the shore of the Danube.

Your tour of this amazing region of Southeastern Europe will be an enjoyable cultural experience long remembered. 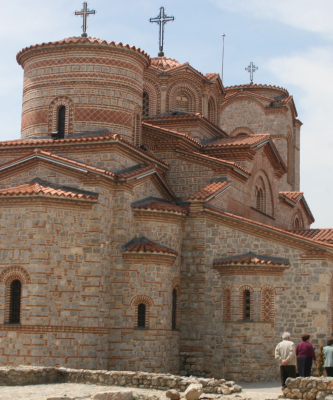