Join the Crete tour only or continue on to Mainland Greece Tour.

Crete, Greece’s largest island, is known for its varied terrain, which ranges from fine-sand beaches at Elafonisi to the White Mountains. Mt. Ida, the tallest of the range, is home to the Ideon Cave, which was the birthplace of Zeus, according to Greek mythology. The capital, Heraklion, is home to the renowned Heraklion Archaeological Museum, housing Minoan artifacts, and Knossos, a Bronze Age settlement.

The Mainland Greece tour will visit the cities of Delphi, Meteora, Thessaloniki and Athens, experiencing the most significant archeological sites from Ancient Greek civilization. Embark on an excursion to the majestic Temple of Poseidon.

Immerse yourself in the history of the Ancient Greek Civilization and the blue waters of the Aegean Sea. 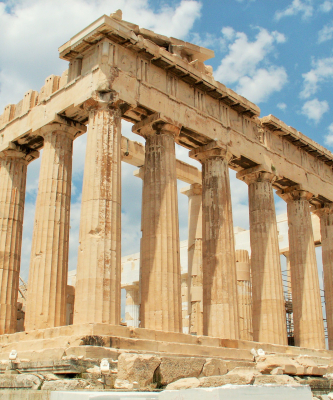 The Acropolis of Athens, Greece