Our Malta-Sicily tours are a wonderful opportunity to visit two islands of the Mediterranean that offer amazing archaeological sites.

Start with a flight arriving into Malta, an archipelago in the central Mediterranean between Sicily and the North African coast.

Tour Malta’s historic sites related to a succession of rulers including the Romans, Moors, Knights of Saint John, French and British. Malta has numerous fortresses, megalithic temples and the Ħal Saflieni Hypogeum, a subterranean complex of halls and burial chambers dating to circa 4000 B.C.

Sicily, the largest Mediterranean island, is just off the “toe” of Italy’s “boot.” It is separated from the Continent by the Strait of Messina and surrounded by the Ionian, the Tyrrhenian and the Mediterranean Seas.

Our Sicily tour includes its’ rich history reflected in sites like the Valley of the Temples, the well-preserved ruins of 7 monumental, Doric-style Greek temples, and in the Byzantine mosaics at the Cappella Palatina, a former royal chapel in the capital city Palermo. On Sicily’s eastern edge is Mount Etna, one of Europe’s highest active volcanoes.

Join the combination Malta-Sicily tour. You will ferry one hour 45 minutes from Malta to Pozzallo on the southern tip of Sicily.

Discover and experience Malta and Sicily through our Malta-Sicily tours. OR join our Tunisia tour following the May & October Malta tour dates. 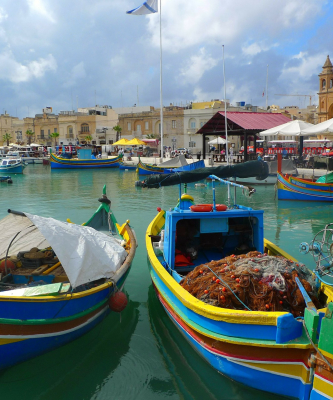 The Luzzu, a traditional Maltese fishing Boats frequently seen in the villages.