Spiritual traditions are the fabric of Indian life, and there is no better way to experience the culture of India than to visit its sacred sites. Our Spiritual North India tour visits North India’s most revered historic and spiritual sites.

On this tour comprehensive Spiritual North India tour, you will journey through a diverse cross-section of India, both geographically and spiritually, from the Himalayas, the Ganges through Rajasthan, visiting the holy pilgrimage sites of the various religions of India.

Explore Dharamshala (home of the Dalai Lama), the holy Ganges in Rishikesh (the origin of yoga) and Varanasi, the most ancient living city. In addition visit the Golden Temple in Amritsar, sacred city of the Sikhs.

Enjoy striking architecture, astonishing landscapes and authentic interactions with pilgrims. Attend the sunset flag ceremony at the border with Kashmir. Marvel at the exquisite Taj Mahal during sunrise and sunset visits. Chant and meditate with monks, and practice yoga if you wish.

On this tour we traverse through seven Indian States, stay at some of the most authentic atmospheric hotels and participate in traditional rituals.

As spiritual traditions are the fabric of the culture of India, there is no better way to “get into the culture” than to visit its sacred sites. One has to embark upon such a journey to understand the complexity that is India and to unravel Indian Spirituality! 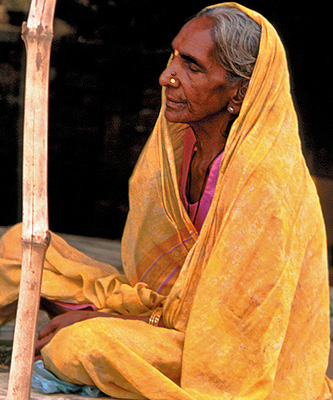 Woman meditating by the Ganges River in Varanasi