Join our small group Sudan tour and embark on an adventurous journey.  Venture out into most remote areas of Sudan to learn about the Nubian culture. On the journey, visit ancient sites along the Nile River.

The Sudan tour starts with a drive to the Western Desert.  In the middle of the desert we reach  mysterious fortress dated to the Napatean time (700-400 B.C.).

Visit significant archaeological sites such as the temple of Amun and the Nuri Pyramids. In addition, explore the magnificent royal city of Meroe and the important Meroitic site Naga.

Continuing onward, the Sudan tour visits the small town of Karima located at the foot of Jebel Barkal. This landmark in the Nubian Desert is the site of El Kurru, ancient capital Napata.

Cruise along the Nile River exploring the small islands and sandy beaches.

In the centre of the Bayuda Desert we reach Atrun Crater. Here, the nomads gather salt from the edge of a green colored pool.

There may be 1 night at a new boutique hotel designed like a traditional Nubian house.

In each setting we are near local villages providing an opportunity to observe and interact with local people in an authentic setting. 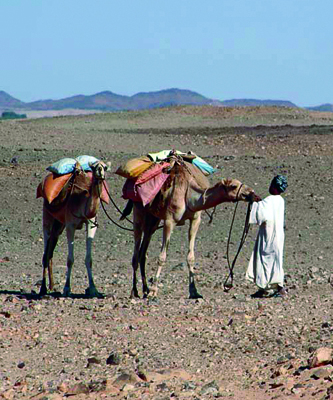