Embark on an extraordinary Caucasus tour. Travel to Armenia, Georgia and Azerbaijan. Experience an extremely complex and interesting part of the world.

Learn about the Persians, Khazars, Arabs, Huns, Turko-Mongols and Russians.

At various times in history, these empires have invaded The Caucasus. Therefore, their people have migrated here. Absorb the rich ethnic diversity that each culture has provided the region.

Immerse in the authentic culture of  The Caucasus. Explore Armenia, Georgia and Azerbaijan. Discover a variety of historic sites and pristine landscapes. Enrich your cultural understanding on our Caucasus tour.

Travel through the south Caucasus. Arrive in Armenia, a country whose tiny size belies its importance in the history of this region. Christianity came early to Armenia (in about 301 AD), making it the first Christian nation.

Explore this mountainous country that is dotted with an astonishing number of churches, cathedrals and monasteries. Most of these buildings date to the 9th and 10th centuries – Armenia’s golden age.

Arguably the origins of all western church architecture can be traced back to this rugged land.

From Armenia, cross overland into Georgia, a remote, mysterious and romantic country.

Tucked between Azerbaijan, Turkey and Armenia, Georgia could be described as Europe’s final bastion.

Enjoy hearing the stories of history! It was here that Jason found the Golden Fleece. Prometheus was chained to Mt. Kazbegi after he stole fire from the gods. In addition, the fearless female tribe, the Amazons, lived beside the Tergi River.

Despite being invaded throughout history, Georgia maintains its own unique culture and heritage.

Culminate our tour of south Caucasus in Azerbaijan. This fascinating country has a complex history that stretches back several millennia.

After that, travel to the capital Baku, situated on the Caspian Sea. Along the way, we embark on many fascinating excursions.

Go now, because The Caucasus region is still so authentic! 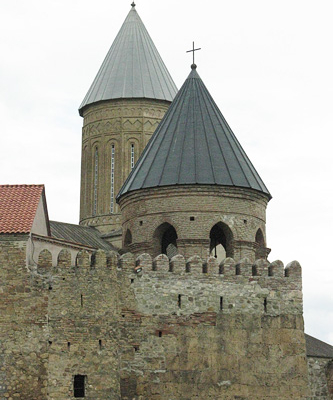