Treasures of Tibet with Nepal

Visit Tibet with Original World Travel and experience the colorful, fascinating Tibetan culture as we explore the towns of Lhasa, Gyantse and Shigatse.  A brief flight over the Himalayas, during which you may be able to see Mt. Everest, takes us to Lhasa, the political, economic and cultural center of the region.  On this Tibet tour, we will have the privilege of exploring Tibet’s most revered temples and monasteries, including the massive Potala Palace and Jokhang Temple, bustling with pilgrims and the 8th c. Samye Monastery. A unique monastery and village rolled into one, Samye is a highlight of a visit to Tibet.

The Tibet tour also visits the Sera Monastery, whose setting is one of the prettiest in Lhasa, hugging the ridge that forms the northern wall of the Kyi Chu Valley. Founded in 1419, Sera Monastery is one of the “great three” Gelukpa university monasteries in Tibet.

As we drive between the towns you will see some of the most stunning mountain scenery, with soaring Himalayan peaks covered in snow, turquoise blue lakes, and prayer flags fluttering at the mountain passes. 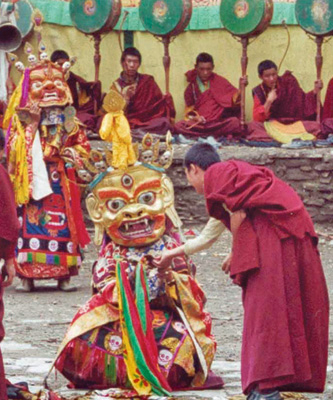