Ancient Cultures of the Indian Himalaya

Ancient Cultures of the Indian Himalaya – Spiti Valley and Kinnaur

Experience ancient Buddhist cultures and unique ancient tribal cultures amidst the dramatic beauty of the arid, snowcapped Indian Himalaya on this small group tour. Visit remote traditional villages in the regions of Spiti valley and Kinnaur.

India contains 70% of the world’s himalayan ranges, yet few people think about visiting them. Therefore, this region remains authentic, traditional and untouched by western visitors.

In this region of hill stations, fertile valleys, lunar landscapes and rarefied mountain air, local inhabitants have carved out a spartan existence in the pockets of habitable terrain.

For the solitude seeker there cannot be a better place than here to experience the sounds of silence, the pristine glory of nature as well as a window into ancient traditional cultures. This is surely the ultimate high for any traveler.

On this remarkable journey you will walk on the most inspiring mountain trails, drive over some of highest roads and bridges, visit remote wildlife reserves, witness age old temples, exquisite villages, traditional architecture and tribal lifestyles. Adventuresome, but not difficult!

“This is one journey that must be undertaken at least once in a lifetime by any discerning traveler” – words of many widely traveled people after having visited these awe – inspiring parts of the Indian Himalayas. 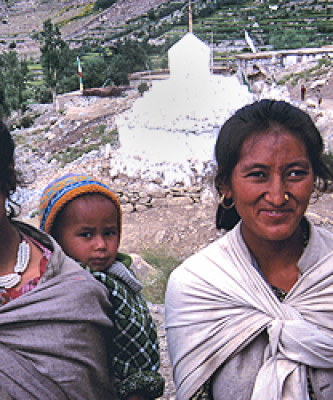