Tunisia: Kaleidoscope of cultures and landscapes

On the Tunisia tour we visit Sidi-Bou-Saïd, the best-preserved Moorish village in Tunisia. It is a MUST for travelers, photographers and writers.

Embark on a tour of Carthage, built on a promontory with sea inlets to the north and the south. The city’s location made it master of the Mediterranean’s maritime trade. All ships crossing the sea had to pass between Sicily and the coast of Tunisia. This is where Carthage was built, affording it great power and influence.

In addition, there is an excursion to Bizerte and Utica (Roman-Carthaginian towns). As well as Dougga (UNESCO), the most prestigious Roman site in Tunisia.

Continuing to Kairouan, (UNESCO World Heritage Site), once the Arab capital for all of North Africa. It is one of Islam’s most sacred cities.

Other tour highlights include the old byzantine city of Sufetula and Raqqada, the second royal city of the 9th century. We enjoy a leisurely visit of Ouled el-Hadef, Tozeur’s beautiful 14th century Medina.

Board 4WD vehicles and explore the golden triangle of mountain oasis, Tamerza, Mides and Chebika.

Then we journey southeast towards the Dahar Mountains to visit the Berber hamlets of Chenini and Douiret. Here we can explore the Berber granaries and the valleys. Next, visit the village of Guellala, known for or its spectacular pottery.

In addition, visit 6th century BC El Ghriba Synagogue in the formerly Jewish village of Harah Sghira on Djerba Island.

Join our tour of Algeria or Malta following Tunisia. 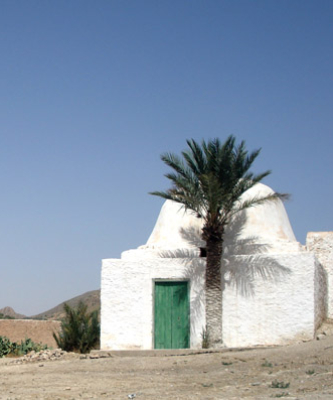